Caught in traffic, I was late back to the station to catch the train home to Colombo but had to stop for a second to shoot the Next Train board – a relic from the golden age of rail travel on the island.

Luckily, in view of this week’s “Trains” challenge from Sunday Stills, I quickly snapped the trains on the platform before shoving my camera back in its bag and racing – as fast as one can race with a two-wheeled suitcase, a large meditation cushion whose carrier bag had given up the ghost at the station entrance, an even larger – dripping wet – umbrella, a yoga mat, one’s handbag and a malla – a raffia-type dilly bag – filled with tripod, camera, water bottle, book and a small hand-towel (absolutely vital on this rainy day in the tropics!) – to find my carriage. *

The swanky new air-conditioned Expo Rail carriage was behind the engine, at the far end of the platform – of course – but the spectacle I made must have been sufficient to draw the attention of the whistle blower, for I arrived, breathless and dripping with perspiration, to a forest of outstretched arms just seconds before the train began depart.

Begun by the British to transport first coffee, then tea and other agricultural outputs down to the port at Colombo, and labour from Southern India, in the late 1800s, in post-colonial Sri Lanka the railways have been heavily subsidised and have not turned a profit, apparently, since 1942.  In almost terminal condition after thirty years of neglect because of “the war”, SLR has embarked on a major refurbishment of the rolling stock and rail infrastructure, including relaying the lines up to Jaffna. 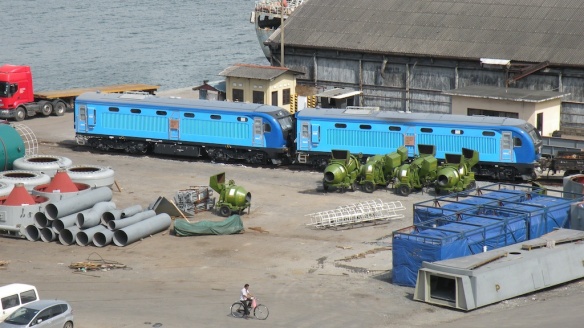 By one of those extraordinary serendipitous coincidences that only seem to happen here in Paradise, this morning’s MMS brought the news that Sri Lanka Rail has increased the cost of first and second class rail tickets.  Given that the cost of a trip in a second class seat from Kandy to Matara (at 277km, one of the longest journeys on the current network) was Rs.360 (about $3.00) (Rs.195 for third class) according to the fares board in my photograph the other day, an increase of around Rs.100 is a hefty percentage hike.  Lets hope these new fares will help defray the cost of refurbishment, and continued subsidies of third class tickets for the most needy.

*  To see just what I mean, there’s a picture of it, all neatly stacked, from the beginning of the trip.

13 thoughts on “The Next Train”