I imagine you, somewhere out on the backwaters, unwilling to stir after a lunch of acharu, and a little fish.  Since lunch you’ve been lying on one of the woven balconies suspended just above the still, soupy, water, flicking occasional droplets into the air to attract dragonflies. 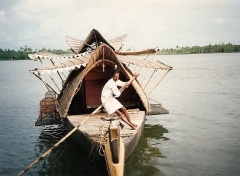 Too lazy to write, take photographs, you pluck at random images from what you’ve seen and heard since boarding the houseboat yesterday.  The texture, and sweet, grassy smell of the boat’s fantastical reed-woven canopy – how  thankful you are for its shady coolness.  Of the kids, scampering home from school along the spindly land paths;  or taking to the water – sculling themselves across the canals, or joining the older folk on the little ferry – standing, as in a Venetian traghetto –  ladies and old gents with umbrellas up against the sun, admonishing the boys not to unsettle the boat by fishing for minnows midstream.  Of the wild and boisterous games the boys played with inter tubes at the jetty before you left.  Or was it the wistful look of a young girl which captured your imagination, wondering about you floating through her world?

Yesterday evening, after you moored for the day – far out in a lagoon – I imagine the tide begin to turn.  Were you watching, as men slid silently across the water from out of the gloom, their tiny lamps flickering in the darkening distance?  Did you catch a glimpse of the scullers, out toward the spits of sand and tidal canal-sides, as they alighted and began hauling on the boulders that operate the ‘Chinese’ fishing nets?

Did you hear the sharp groans of those improbable, preying mantis-like machines growl above the surf on the other side of the spit?

Or did your gaze gravitate toward the land, where the sky – black and purple above the red – turned the palms, the trees, the little houses, the churches, into remnants of the inferno?   Did you have one of those days? 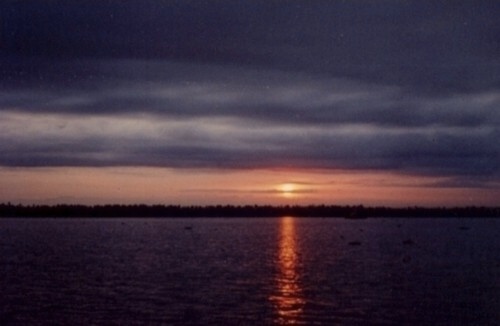 Afternoons.  I remember tiny flying fish skittering with impunity across the glassy surface of the water, making ripples like self-propelled skipping stones.  All is quiet, only the occasional chirp of a sparrow, the drone of a slow flying insect.  Faint, desultory conversations drift across the water from a handful of old men, sartorial in white dhotis, shirts and scarves, as they play a game with stones on the shady dock.

It’s a domestic time for the Garudas, the bright-tan winged vehicle of Vishnu.  In the lassitude of late afternoon, they glide the thermals, sweeping down on untended building supplies:  stealing fine strings of coir, slivers of bamboo – landing in a single swoosh into the heart of a Kora palm, to build their nest in the shade of its rustling fronds.

As the day draws to a close, top-heavy shadows from the encircling coconut trees will segue across the water, where the fishermen, having gathered up their nets, will be readying their boats.  Out past the village, in the protective elbow of salt-white dunes, the black-hulled kada wallam, the seagoing boats, will be bristling with activity;  their dark, lean chested crew, heads wrapped in faded head cloths against the incipient cold and their once-garish lungies folded at half-mast, will be working with their accustomed easy co-operation.

I imagine your day ending on a timeless landscape of rippling water, shot by the rays of the sinking sun.

Tell me, was it one of those days? 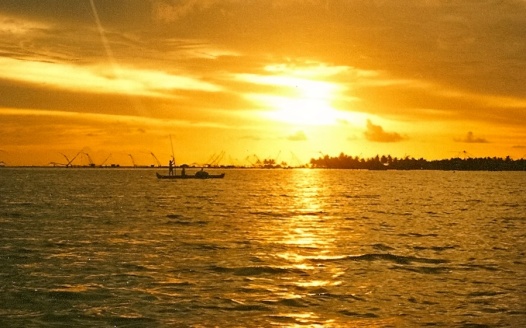 This is a re-worked version of one of my very earliest posts – viewed by three intrepid web-explorers – including Naomi Baltuck.  In thinking about Ailsa’s Liquid world, and Jake’s call for “Natural Resources”, places like the water world at Wasgamuwa National Park in Sri Lanka and the Backwaters of Kerala sprang immediately to mind.

I’m so nervous about a new nibble for the Girls that I can’t concentrate to tell you about the glorious wilderness resource of the lakes of Wasgamuwa, but I need to engage, so please, enjoy these grainy old snaps from the Backwaters, marvel at the ingenuity of the ‘Chinese’ fishing nets, and imagine yourself sprawled on that little balcony just above the water.  If you’ve been there, I hope you had one (preferably several) of those days;  if you haven’t, I hope you can imagine how it might feel. 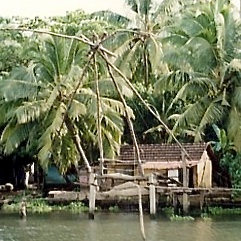 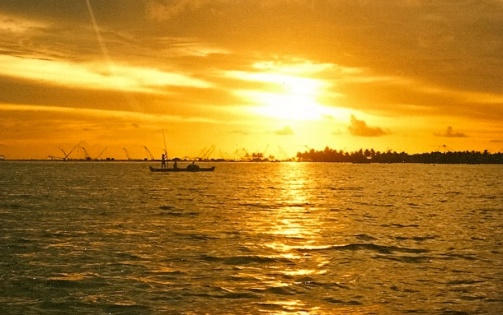