TravelSupermarket.com has sent out a challenge to post one photograph in each of the five colours – blue, green, yellow, red and white – to be judged by a panel of photographers – and there’s even a prize!

I was bowled over when James at Plus Ultra nominated me to join Capture the Colour – and to my shame it’s taken almost a month to choose five photographs.  Dithering seems to have become my strong suit!   The only excuse I can give in defence is that the closing date of the competition –  29 August – is also the date by which I must make the final decisions about the next steps in my life.  I haven’t decided between those possibilities either.

Seriously, the looming cut off date, and a psychological need to cross something off my “to do list” has at last prompted a decision – and although my selection is totally different to the “possibles” I’ve had lined up for consideration these last several weeks – I hope you’ll enjoy them nonetheless. 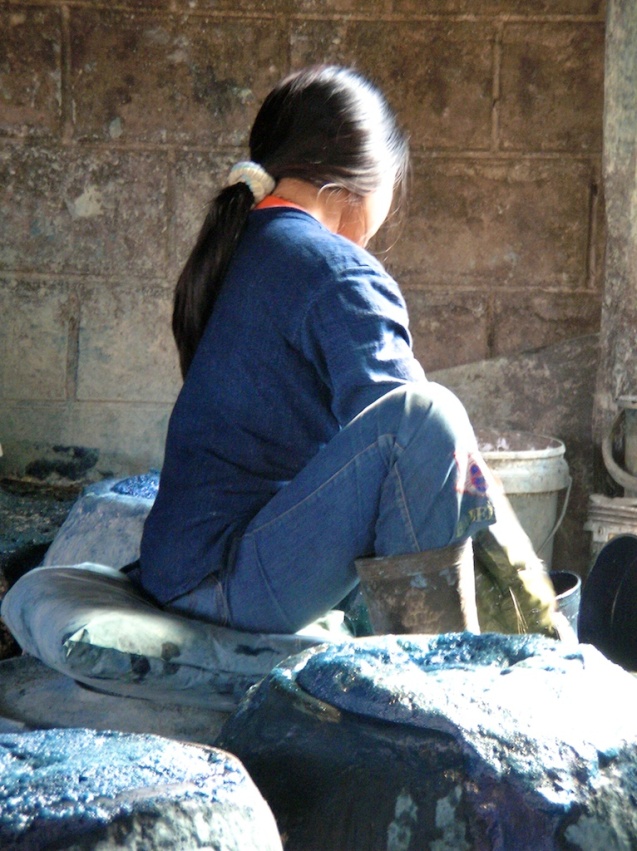 After Ma died, I went with a group of weavers to Lao.  One of the great joys – other than the discovery of such a cornucopia of weaving styles and designs – was to explore the fascinating art of dye making – king among which has always been indigo, an unremarkable-looking plant which has spawned empires.  We went one day to a large enterprise in the city (the family must have had a dozen women working there) for the sole purpose of concocting our own dye from the dozens of roots, seeds, bark and other natural materials still used by these weavers, and testing it out on a small piece of hand-loomed cotton (mine turned out to be a disappointingly muted shade of rose-pink!).   But it was the indigo dyers who captured my attention – especially this young woman with the exceptional posture, working among the vats of frothing blue. 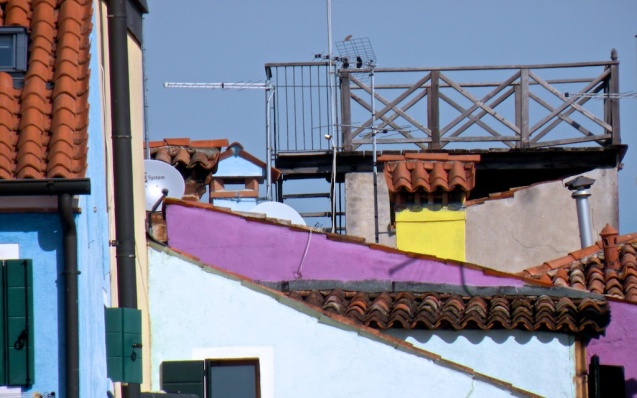 In a town where colours vie for your attention, this yellow chimney stack stood out like a beacon among the rooftops, antennas and altanas of Burano.  Which goes to show that yes, yellow is the most noticeable colour.

Although this photograph was taken at my home here in Sri Lanka, and might not – technically – be termed a travel photograph, it is among the most exotic of lizards, and it is playing possum on a god’s head – my little greenstone Ganesha, to be exact.

Last year was one of the most challenging of years, and I needed a sedentary adventure.  What better adventure could one concoct for oneself than a trip to watch the Kandy Perahera –  that phantasmagorical procession which grows in grandeur each night for the ten days leading up to the Nikini full moon in August.  Now, the perahera is essentially a supplication for rain, with the elephants – as the clouds – playing the leading roles.  But nothing – elephants, drummers, dancers, fire and stilt walkers, whip crackers, temple officials, flag wavers, or avid devotees watching from the sides – could be more integral to the success of the parade than the brazier carriers, for it is their fiery baskets which light the parade, wrapping the action in clouds of red, the colour of passion and excitement.

The wind was so strong I’d had trouble holding my camera still enough to focus on the scene below and was sidling, crab-like, to find a more sheltered position on the platform around the great dagoba at Mihintale when, out of the corner of my eye, I saw a monkey.  I stopped, and stood as still as I could, s l o w l y  turning to face him as he sat, raiding the urn in which faded offerings had been thrown the night before.  These macaques are accustomed to people, of course, but this fellow was so intent on battling the wind for possession of the lotus flowers he paid little attention to me.  Bad hair day and all, he perched on the rim of the urn, bracing himself with one prehensile foot, all the while holding down an escaping flower with the other, and popping crisp green lotus seeds into his mouth as quickly as his nimble little fingers could pry them from their casings in the wildly flapping flower in his other hand.

TravelSupermarket’s Capture the Colour Competition.  The rules are simple:  Publish a post with five original shots from your travels, each one representing the colours blue, green, yellow, white and red.  Tag five other bloggers and link back to TravelSupermarket on Facebook or Twitter (with the tags @travelsupermkt and #capturethecolour).  If you don’t have an account simply email your entry to capturethecolour[at]travelsupermarket.com, complete with your name, address and phone number before the closing date of 29 August, 2012.

Please note that anyone can join in – you don’t need to be nominated to take part in the competition, but I would like to acknowledge the enjoyment I get from the work of these bloggers by nominating them in any case, with my apologies for putting them under the time gun:

Good Luck to my nominees, and to everybody who’s entered – a little travel money never goes astray!

77 thoughts on “The World in Five Colours”