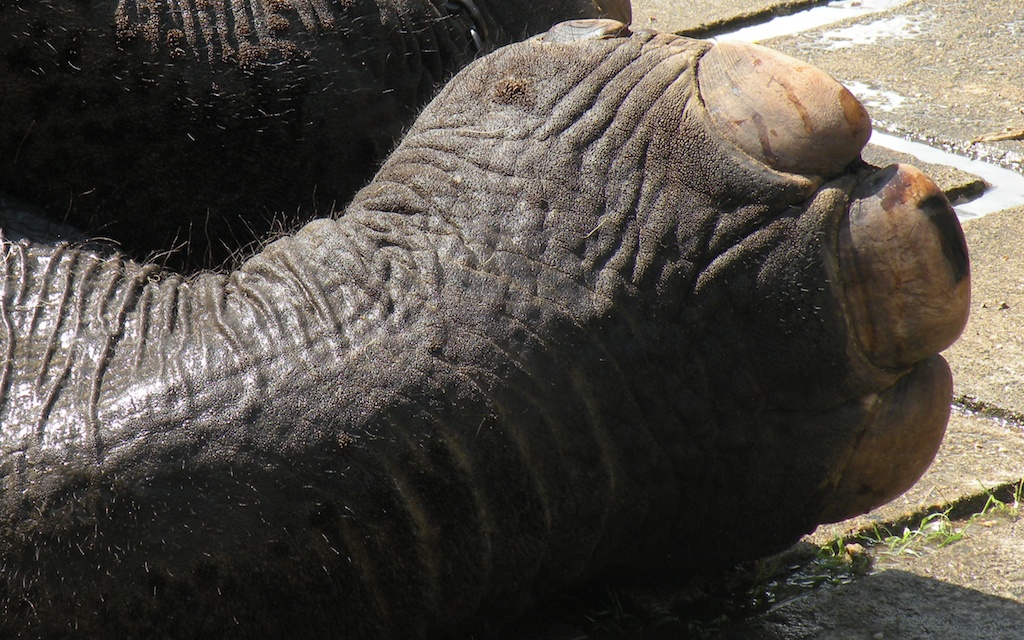 In the morning I headed straight to Temple Street to see if I could catch Travellersdish, who I’d missed the night before.  She had probably been caught in the lock down before the parade, not knowing I’d left my arrival into Kandy so late.  Not finding her in, I left a message and wandered among the offering stalls that march up the road beside the park, making my way toward the fountain in Palace Square.

Along the way I couldn’t resist lingering at the stalls – beguiled by the sweet smell of water lilies, and the hum of bees

as buckets of lotus and water lilies were being unloaded 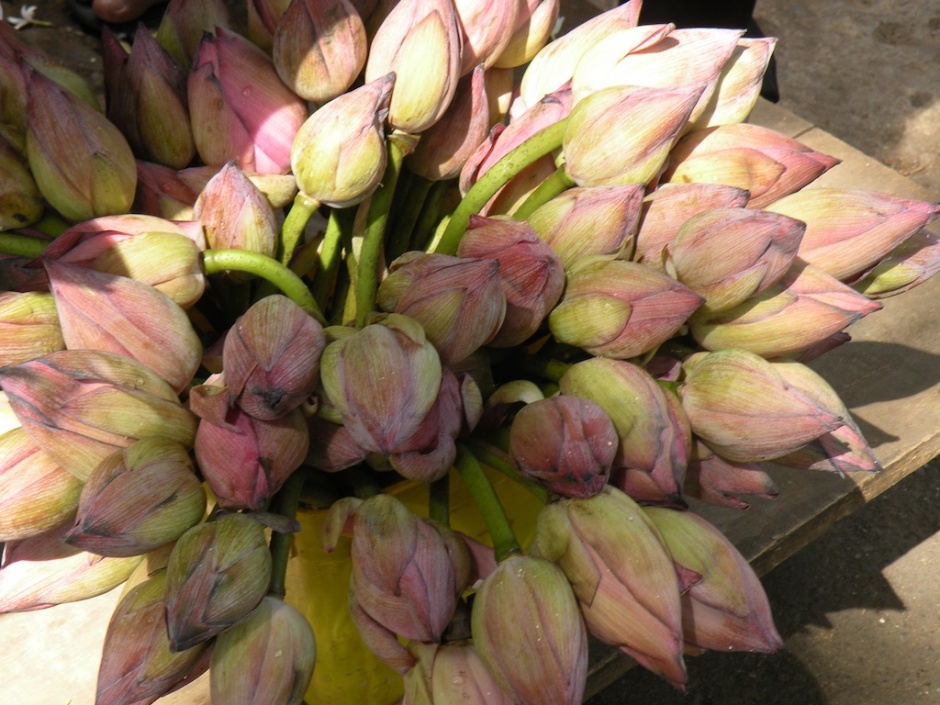 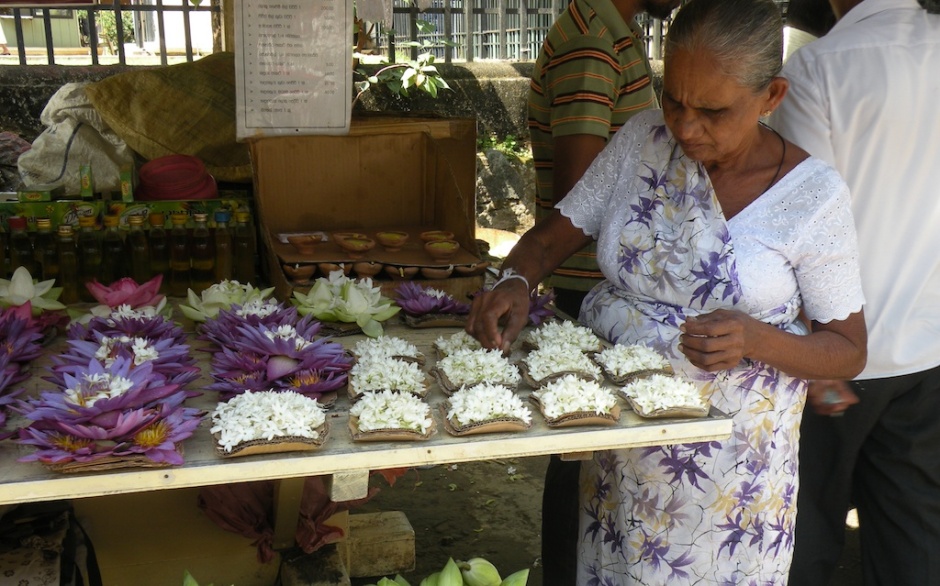 and blushing araliya (frangipani) on simple slabs of cardboard 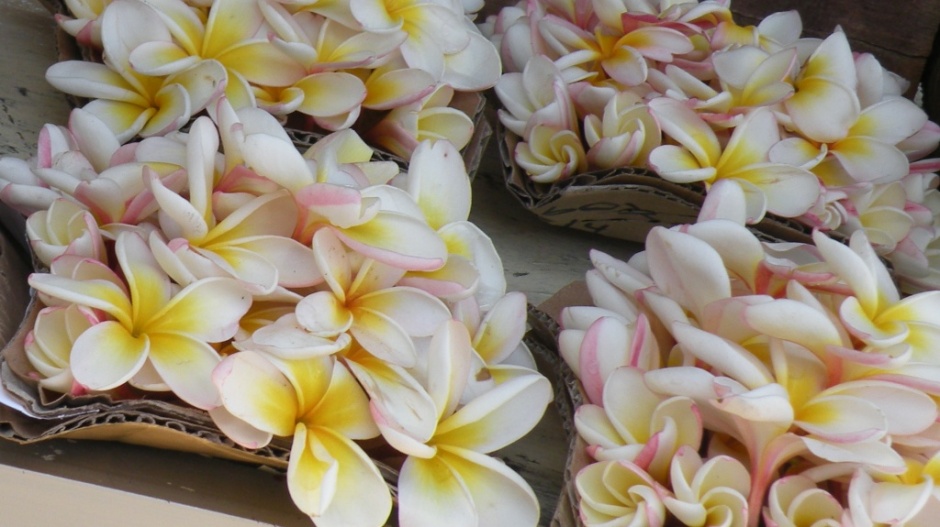 or more elaborate combinations, with jasmine and Manel, the national flower. 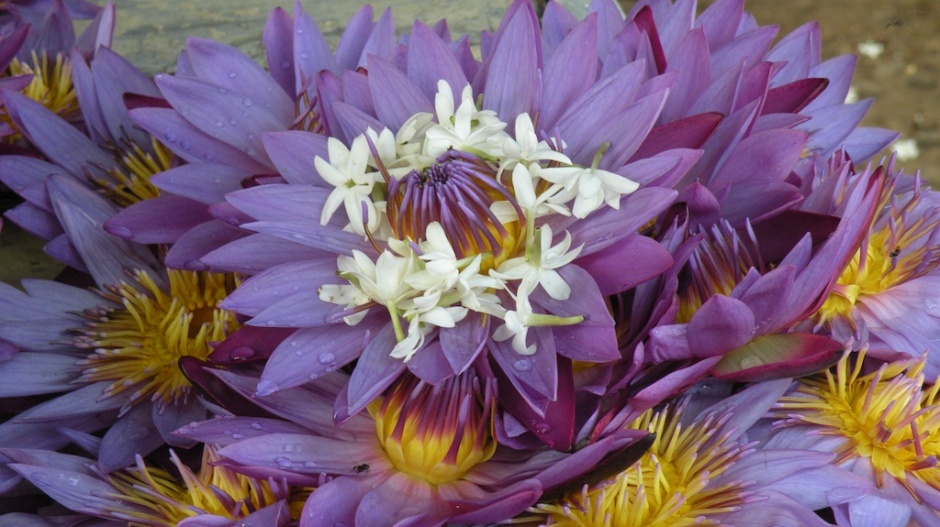 A stallholder peeled open a perfect white lotus, offering it to me with a smile – but first I had to take a close up, so I could share his gift. 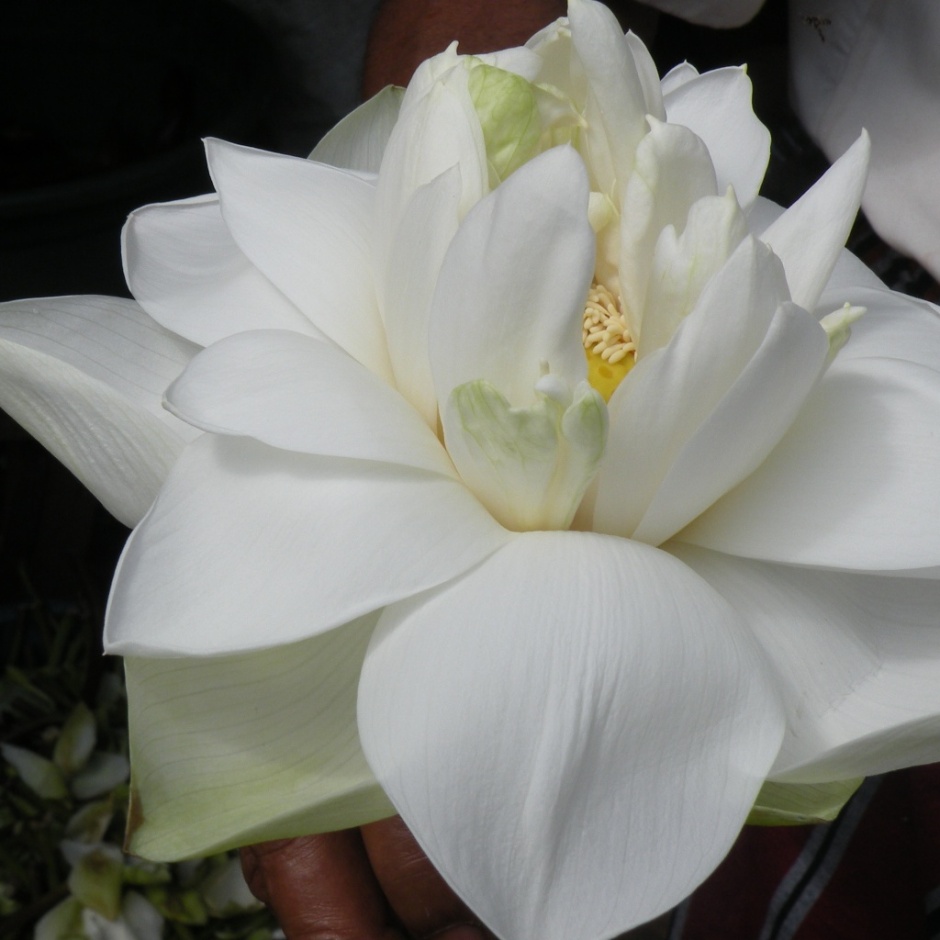 A handful of people had gathered by the old cast-iron fountain in Palace Square – now a temporary bedroom, bathroom and dressing room for Perahera elephants.

I was going to be in luck, it seemed.  Just as I’d hoped, bath time was in progress.  As I sidled between a Buddha statue and a parked truck, there, right in front of me, was an elephant.  Glistening in the morning sunshine he lay supine – trunk extended across the paving, front legs neatly crossed at the ankles – being tended by two lean men in hitched up lunghis.

And in the far corner of the little square, a bored and unchaperoned star was doing trunk stretching exercises – either that, or an impersonation of a Kandyan dancer, trunk imitating outflung, undulating arms, back feet tattooing to the remembered beat.

When I looked at him close up, I could have sworn he was laughing, blowing air through his trunk, singing on a silent elephant wavelength.  By the way, how do you like the pretty grey and red ribbon around his neck? 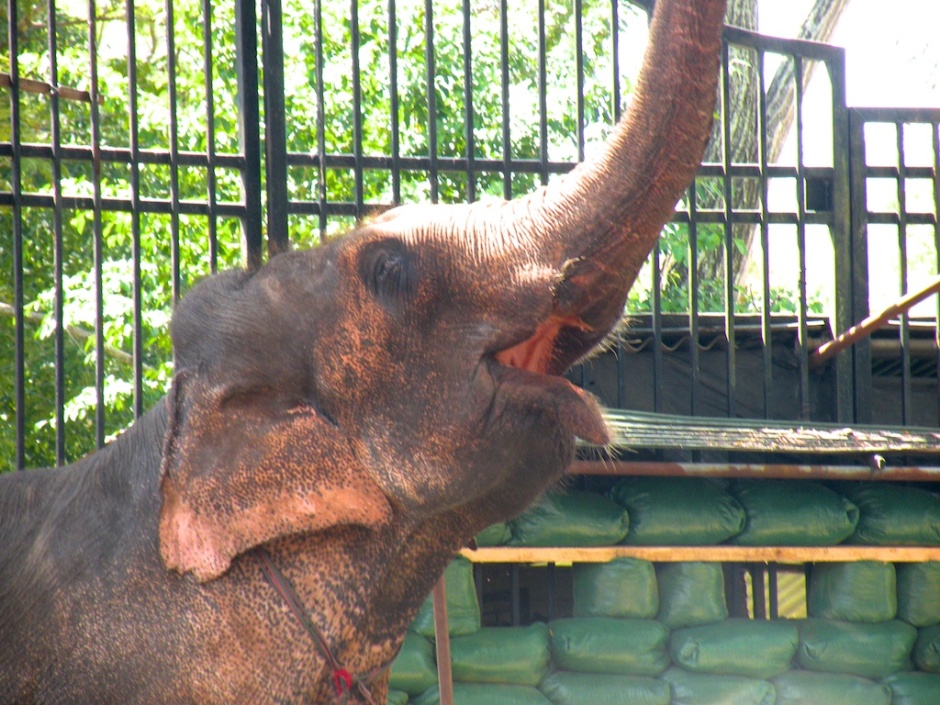 But the bath time rituals at my feet were what captured my fascinated gaze – and lens – for the next forty minutes or so.  One mahout worked the rear half, the other the front – quietly, methodically, efficiently, as I’d noticed before, when we’d watched an elephant loading logs onto a truck.  Starting behind the ears

the mahout worked carefully across the shoulder, , under the top front leg – you’ll notice I’m following operations at the front – slowly across the chest, to the legs 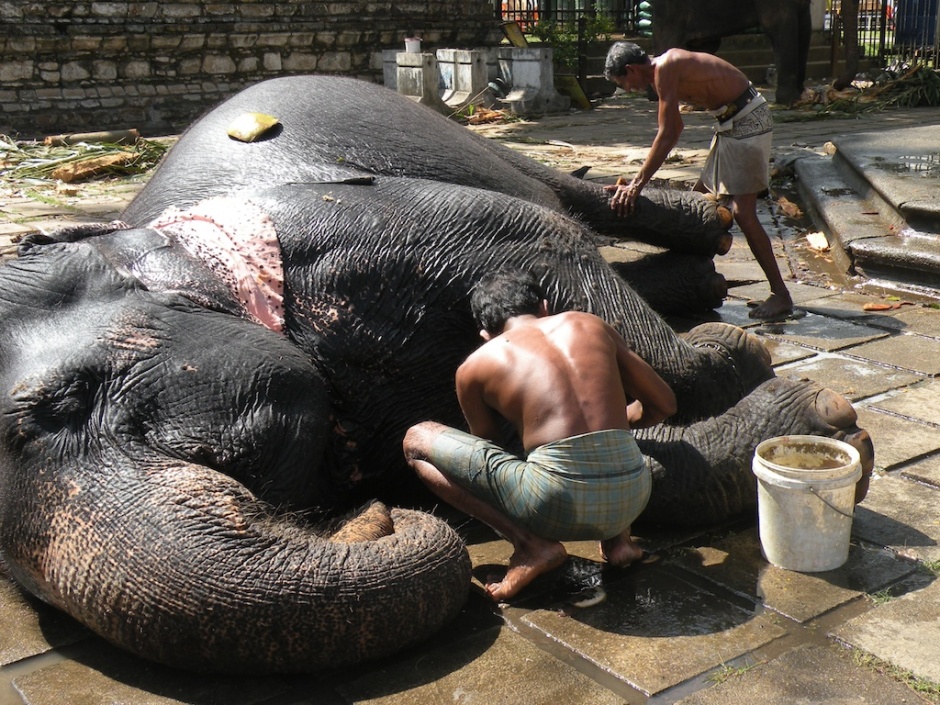 working painstakingly all the way down the inside bottom leg

to his neatly trimmed nails – an operation which must have been undertaken before the journey to Kandy a couple of weeks ago.  These days the trip is almost always by truck – unless an animal suffers motion sickness.   It’s sad because even ten or fifteen years ago one could be sure of elephant sightings on any of the roads leading to Kandy in the weeks leading up to the Perahera season.

After the legs, the action moved to the trunk, looking so pink and vulnerable, unfurled like that across the stones. 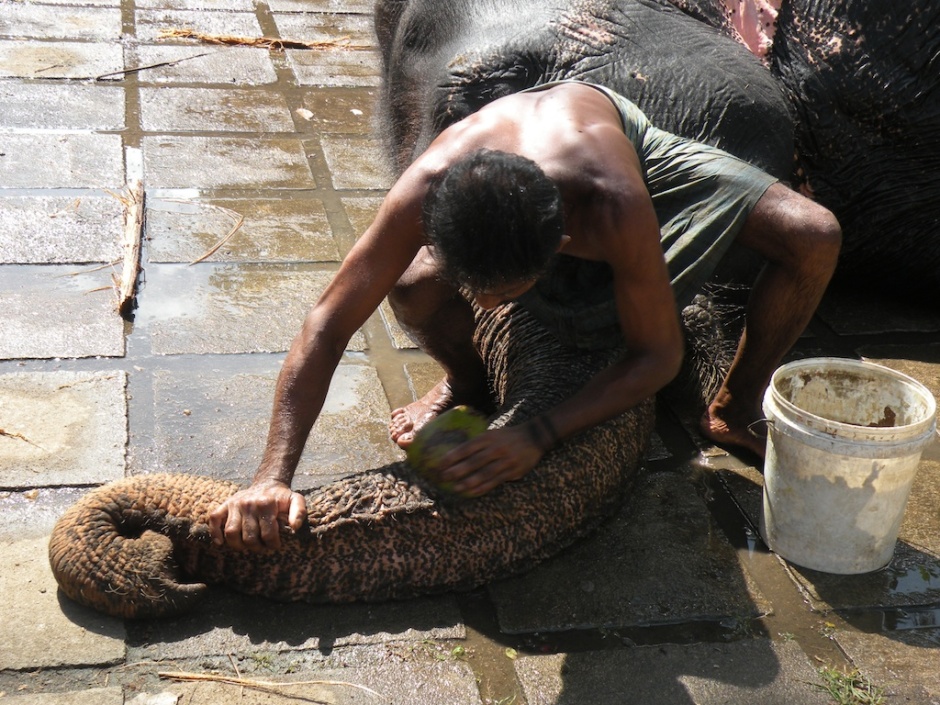 It seems the world has stopped, I thought, standing there in the middle of the city.   The animal seemingly barely breathing – so quiet and still.  The mahout’s occasional instructions to move a foot, an elbow, uttered clearly, but quietly, are obediently and silently executed.  We stand enraptured, forgetting about everything except the elephant, and the mahout.

In the glare, it looked as if the animal’s eye was closed and I wondered whether he was dozing, until I did a close up, to see he was keeping an eye on proceedings 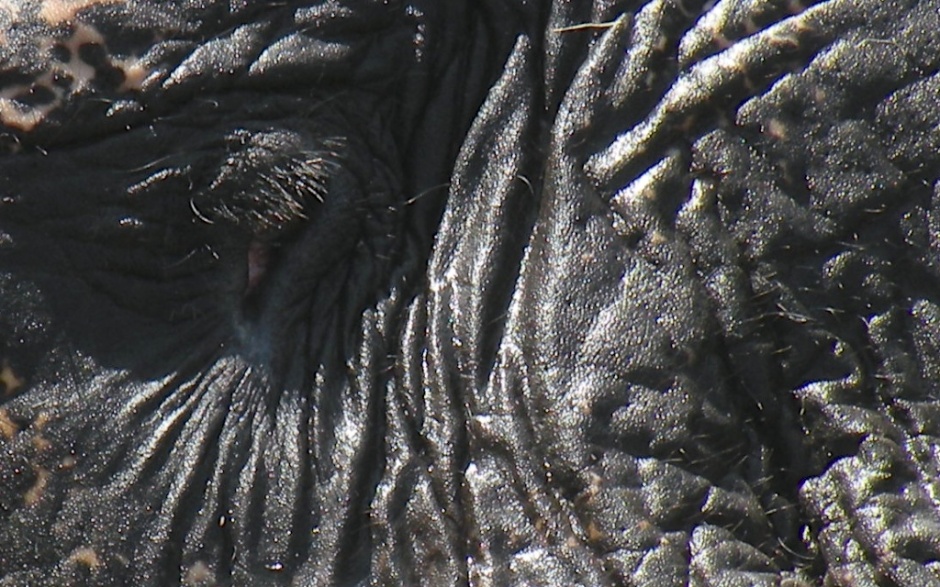 expecting the cool sensation of a bucket of rinse water at any minute.

After the rinse, the mahout sharpened his coconut husk scrubbing utensil

with a wicked sickle-tipped knife

before moving to work in tandem with his mate across the elephant’s vast side and tummy,

eyes open, observing the world around him.

Across the expanse of our elephant’s back, I spied a baby being led away – for him, bath time was over  already.

Jake must be credited with tempting me to post this close up of the sights of Temple Street and Palace Square during this year’s Kandy Äsala Perahera.  You can see other entries in this week’s challenge here.