A few days ago I came across some shots Angeline had taken on a ten minute iPhone challenge she follows.  It got me thinking.

Then yesterday it seemed the universe was saying “listen”, when  Shannon at Seeingspotsphoto challenged and  inspired me to look again at the mundane – the everyday sights of the world around me.  As if anything could be mundane here!  But you see, I think I have become immured to the everyday sights around me here, just as we do in our ‘normal’ home environments.  I’ve begun to notice that it’s no longer my paradise isle  that’s the exotic location – that appellation goes to Venice, for instance, or Bente’s winter wonderland up near the Arctic Circle.  And that saddened me.  What’s the point of being here if I’m no longer enchanted by everything my eye beholds?

Step one, put that little pocket camera in my handbag so I’ve got a camera at all times.  Check.

Step two, pull the thing out and take pictures of everyday life.  Get into the habit of using it instead of just charging the batteries and taking it out it when I’m going on a trip.

Step three, take up her challenge to see what I can see.

By the time Kumari and I had bought new brooms, mops and brushes, a refill for the gas cylinder, a pillow, mosquito net and towels, done a little shopping for at the kitchen, 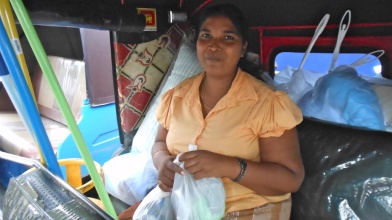 After all that shopping, not much room left in the three-wheeler for me

and stopped to buy some fresh manioca from the Manioca Man,

His advertising was a bit droopy late in the day, but the tubers were still crisp and bright

it was almost dusk before I was able to set out on my ten minute dash to capture a photograph.  i went by conventional taxi, toward town.

The sky was turning to ink with every passing second, creating lacy silhouettes with the leaves of a mango tree,

and strong jagged cutouts from the fronds of the coconut palms.

Then the lights came on at Barefoot, and the warm glow from the cafe and courtyard beyond was like a beacon in a sea of blue.  I thought it was very beautiful, so went in to have a glass of wine. 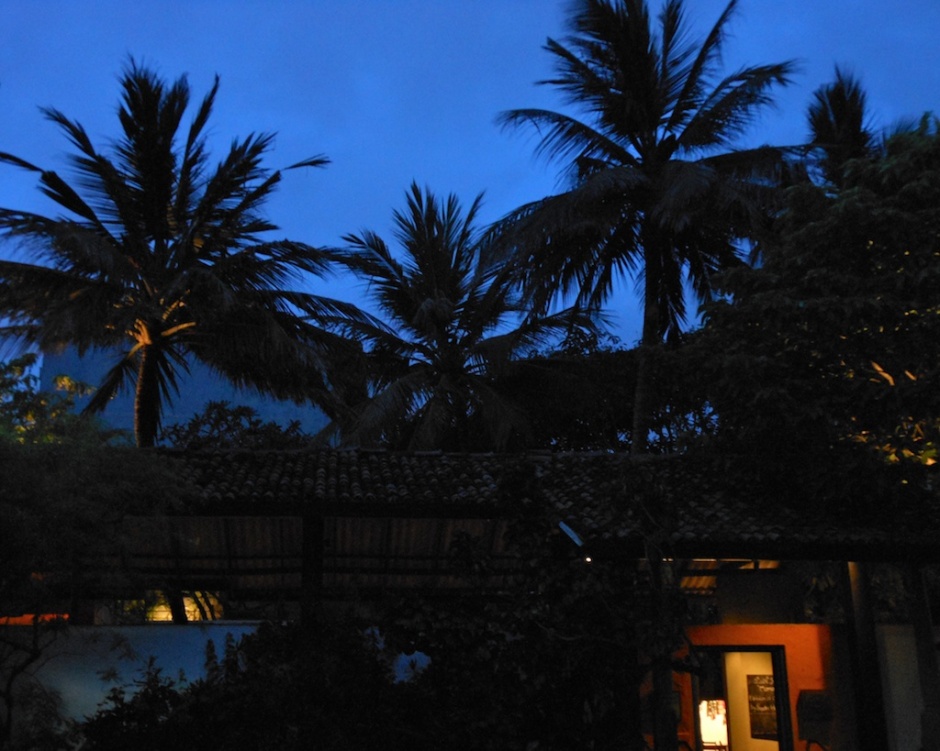 A lovely, and unexpected jaunt.

62 thoughts on “Ten Minute Dash to Capture a Photograph”