Having dispensed with “N” in the most haphazard of ways, I must indicate my resolve to practice and achieve writing discipline, by returning to the beginning of the alphabet, where “A” is an akuru.

The 40 or more voluptuous, and intricate symbols of the Sinhala phonetic alphabet were not, as you might have expected from one so stubbornly unilingual, beyond my grasp.  Much easier to grasp, in fact, than a system of counting which changes depending on whether one is counting people, widgets, money or time.  No indeed.  While my rendering has never matched the elegance of R’s mother, whose shopping lists bear more resemblance to calligraphy than is decent, my akuru were readable, childlike, but readable, a fact of which I was inordinately proud. 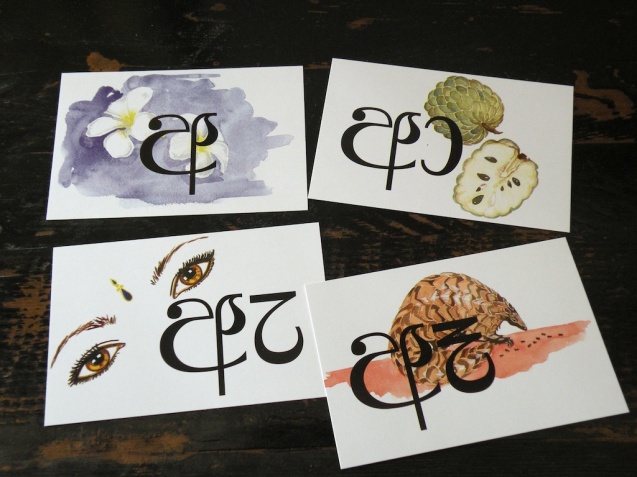 And then one day, I fell down the stairs, oops, and looked in dismay to see three legs at the end of my body.  No, no, no – that’s just the ankle and foot of a leg that’s parallel to the rest of it.  And from that moment to this, I can barely recognize one akuru, and have for the first time in the almost 20 years I’ve been visiting or living here in Sri Lanka, developed an insatiable yearning for apples.  Specifically, I dream of sinking my teeth into a perfectly ripe, crunchy, sweet, juicy Pink Lady apple.  Nothing else will do.

It seems everyone has left the city.  It’s as quiet as an English village in the depths of winter.  Barely a sound:  no dim growl of traffic wafting up from the Parliament roundabout at the bottom of the hill; no amplified jingles announcing the imminent arrival of ice cream van, lottery man or a baker’s cart; nobody horning* at the handia* as some blighter refuses to give way at the stop sign.  Into this unfamiliar silence the birds rejoice in an unending symphony, eclipsed only by the occasional guttural boom of the monkey, rallying his troops from the afternoon siesta.

For, at last, Avuruddu has arrived – the New Year season for the Sinhalese and Tamil people of my adopted land.

In accordance with custom, there have been fervid preparations in every house on the island.  Maids, mallis, masters and mistresses, everyone has been intent on giving their home a facelift, cleaning everything, inside and out.  Gardeners and handymen have been working around the clock in the more affluent areas, leaving their own responsibilities to their wives and children if they can.  Women have baked piles of sweet rice flour kavum and other traditional recipes of the season, and have bought or made new clothes for everyone in their families.  The digging of trenches, to ripen the bananas, is men’s work, as is the purchase of sufficient fireworks to announce the New Year in appropriate style, and of course, the getting in of a little Arrak, double distilled for preference, on this special occasion.

The Girls and I are baching*.  Shriyarni, like everyone who wasn’t born in the city, has left for a week to be with family in the village, or ancestral home.

It’s 12.56 pm.  Fireworks proclaim the New Year season to be upon us.  At certain auspicious times over the next 48 hours, bungers large and small will burst from every house, every compound around me, marking every stage of the elaborate schedule of events that comprise this, the most important cultural celebration of the year.

Everyone comments on the fact that the President’s Avuruddu message came early, at 12.11 pm.

7 thoughts on “Returning to the Beginning of the Alphabet, where “A” is an Akuru”